I saw my therapist today. He had several bits of advice for me, the two most relevant being “Don’t be the mama” and “Maybe your job is to observe.”

I find myself observing a lot lately. I hate it. I’m good at it, but I hate it. Because I do it so often and so much I see things that other people don’t and things that other people don’t want to be seen or noticed. And they affect me. I see patterns in behavior and FB posts, put things together. It’s not that difficult if you never stop thinking and rarely stop watching. I don’t have a place to put the things that I see. They just swirl around in my head until they dissipate or cause me to melt down. There are situations that truly worry me. They end up in my dreams and make it hard to breathe. But I can’t not watch. I can’t not see.

I’ve been thinking a lot about core beliefs lately. I went to a lecture about them Tuesday, which made me think more. I realized that my core beliefs are an explanation of a situation. And it all comes back to the wire monkey – Harry Harlow’s study with monkeys. I drew a diagram to make more sense of it. 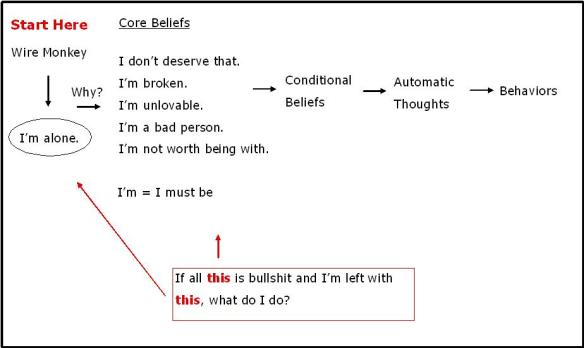 If you’re confused looking at it, try living it. I am a much different person now than I was 6 years ago before starting cognitive therapy and 9 years ago before entering the world of mental health treatment. I am assertive. I don’t take much shit from people. I think differently, act differently, see things differently. I know why I think what I think, what’s distorted and what the rational responses are. But it doesn’t change the source. I realized this week that the core beliefs I’m fighting are a rationalization of a situation, a situation that doesn’t change.

Let me explain. (see diagram) I experienced a wire monkey life, which led me to the conclusion that I am alone. I know that alone is a state of being and lonely is a state of feeling. I experience them both. But alone is a more powerful word. And in trying to understand just WHY I’m alone, I’ve come up with these core beliefs, that lead to the conditional ones, the automatic thoughts and behaviors. I fight these beliefs. I mostly know they’re not true. But the situation doesn’t change. I still feel so lonely.

I told my therapist today it’s like I’m missing essential code. He said that’s like “I’m broken.” But it’s different because it came before that. It’s not a thought. It’s like I lack the ability to feel connected to people. Those monkeys, Harry Harlow’s monkeys, the ones with the wire mothers? They were fucked up monkeys. They didn’t get better and they never learned. They were programmed wrong and they couldn’t change. But I wonder if they knew. I have the odd privilege/curse of understanding, but I can’t fucking change it. (sigh)

I watch and I try all sorts of things. I help people, and don’t help people, and watch, and wait, and try to figure out just how to feel connected, to find someone who’s not crazy, who will listen to me, who isn’t stupid and who’s not too busy to spend time with. Someone who gets it and doesn’t give too much back. Someone I don’t have to pay. I have yet to find someone like this. This is why Jim says, “Don’t be the mama.” I need someone to take care of ME.

One of my friends quoted me in group last week. She reminded me I had said a few weeks back that I need the space on the couch next to me not to be empty. That is so true. But I also need it not to be filled by someone that bugs me.

So I spend a lot of time alone. Most of the people I’d like to spend time with are super busy. I used to be one of those uber busy people. I still am sometimes but right now I am almost unscheduled. It’s very frustrating when every time I ask someone to do something they’re busy and I’m not. I guess when I’m busy I don’t notice as much how unavailable people are, but I notice now. And I feel very lonely. I go many places and I meet a lot of new people, but the feeling doesn’t change. Oddly enough, I feel closest to people I can’t get close to, people with whom most of our relationship exists in my head.

Maybe it is my job to observe.